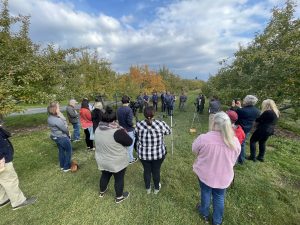 PERU, NY – Today, coalition members from Grow NY Farms met with state officials at Rulfs Orchard to discuss the need to maintain the 60-hour overtime threshold for farmworkers. The event served as a continuation of Grow NY Farms’ statewide campaign to bring awareness to the detrimental impact a lower threshold would have on the agriculture community. New York State officials joined farmers and farmworkers who will be directly affected by this change to better understand the real implications of lowering the threshold from 60 hours to 40. The overtime threshold was determined by the 2019 Farm Laborers Fair Labor Practices Act and is in danger of being decreased further. This tour is a part of a unified statewide effort and follows similar tours hosted in Western New York, Central New York and the Capital Region.

“Each year Rulfs Orchards strives to expand our operation to diversify our produce and better serve the local community, all while growing the North Country’s agriculture industry. We hope to continue this mission for generations to come. But the future is uncertain. State officials must recognize our industry is unlike others. We are at the mercy of a short peak season and subject to unpredictable weather. New York State must listen to the agriculture community and hear our message. We cannot endure the economic pressures of a lowered overtime threshold,” said Jon Rulfs, Owner of Rulfs Orchards.

“With food prices going through the roof, shouldn’t we be trying to alleviate costs on farms, not increase them? Downstate Lawmakers who pushed this law don’t know farming and just how much the upstate economy depends on agriculture. There’s no question that reducing the overtime threshold will force some of our farms to cut hours or eliminate jobs. Other farms will be pushed out of business altogether. We can’t afford to lose one. If buying locally grown products is important to you, then you should know that a Wage Board will soon make a decision that could affect what will or won’t be found at local farm stands and farmers market next year. It’s very important more people weigh in on this really important issue. We really need the support of Governor Kathy Hochul.  Given the economic challenges of COVID-19, supply chain problems and food prices going up week by week, now is clearly not the time the raise costs on New York farms,” said Senator Dan Stec.

“The agricultural industry continues to demonstrate the importance of fresh, local food and the need to strengthen our food supply chain. The last year has been a challenge for us all and has only exacerbated longstanding issues in the agricultural industry, and it’s critical that we don’t add to that burden. That’s why I’m calling on the New York State Wage Board to maintain the current 60-hour overtime threshold for farmers and laborers. At a time when our economy is still recovering, it’s critical that we don’t increase costs for farmers so they can be competitive. As a former dairy farmer, I know that farming is unlike any other industry and to change this threshold now would not only have devastating impacts to the agricultural economy, but our economy as a whole,” said Assemblyman Billy Jones.

In October, leading agriculture institute Farm Credit East, issued a report finding that a 40-hour overtime threshold will ultimately crush the agriculture sector in New York State, with impacts extending beyond industry to local community. The potential increased labor costs combined with past and scheduled increases in the minimum wage would impact the financial viability of many farms by significantly increasing costs, reducing net farm income and cash flow. Key findings estimate mandatory overtime pay at the 40-hour threshold for agricultural employees in New York State would result in increased agricultural labor costs of approximately $264 million per year, an increase of 42%. The industry could not survive with that.

Prior to the adoption of the 60-hour overtime threshold, the industry standard for farmworkers was 80 hours during peak seasons. This practice reflected the fact that the agricultural industry includes labor-intensive periods during harvests and for the constant care of animals. The lowering of the threshold to 60 hours served as a compromise, finding a workable solution for farmers and farmworkers. Anything below 60 hours would render that compromise a sham.

As some agricultural work is seasonal, many farmworkers still seek to work as many hours as possible when the work is available. A further reduction of the overtime threshold will reduce their already limited opportunity to work. Moreover, any reduction threatens farmers’ ability to afford workers during the peak season and consequently the ability to operate these farms at all. The workers who want more hours will simply go to other states — like Michigan, Ohio or Pennsylvania — where they can work more and make more.

Later this year, the New York State Wage Board will revisit the 2019 Farm Laborers Fair Labor Practices Act’s 60-hour overtime threshold for farmworkers and determine if an adjustment to 40 hours will be necessary.

The following letter to the editor was originally published on September 12, 2022. The article…

New York Farmers and Farmworkers Urge Gov. Kathy Hochul and the Farm Laborers Wage Board to Keep Overtime at 60 Hours

Video testimony from farmers and farmworkers across the state available below Albany, NY –…